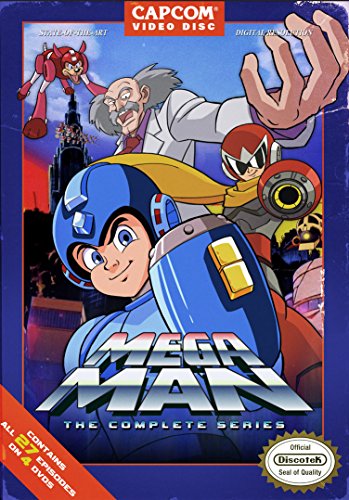 He’s the super fighting robot, and he’s got your powers! Battle through all 27 episodes of both seasons of the classic Ruby Spears series in this 4 disc DVD set! Join Mega Man, Proto Man, Roll, Cuts Man, Guts Man, and all the rest of your favorites as Mega Man battles the evil forces of Dr. Wily and attempts to save the city from his evil machinations.

Based on the popular video games from Capcom, this classic series follows the attempts of Dr. Wily to take over the planet. Whether holding cities hostage via earthquakes, giant lasers on the moon, or mind control rock music, there is no scheme Dr. Wily won’t try! Watch as Mega Man puts an end to these nefarious plots, along his creator, Dr. Light, his sister Roll, and his faithful mechanical dog Rush!

This is English language only. It is US region 1.