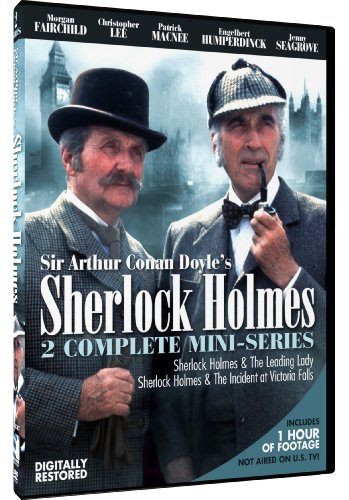 Sherlock Holmes…as you’ve never seen him before!
This exciting DVD release contains 2, 4-part TV Mini-Series productions based on the beloved Sir Arthur Conan Doyle character.
Sherlock Holmes & The Leading Lady
Holmes (Christopher Lee) and Watston (Patrick Macnee) are summoned to recover a stolen bomb detonator device that Holmes fears will be used to kill the Austro-Hungarian Emperor, Franz Joseph. Complicating matters is the appearance of Holmes old flame, opera singer Irene Adler (Morgan Fairchild), whom Holmes discovers he still loves. Set against a backdrop of international havoc, Holmes and Watson face dangers unlike any they ve faced before!
Sherlock Holmes and the Incident at Victoria Falls
Holmes must save the world s most famous diamond, The Star of Africa. On route via Africa s Orient Express, someone is killed and one of the passengers is the murderer. While attempting to solve the case, our heroes encounter ex-President Teddy Roosevelt (Claude Akins), Lily Langtry (Jenny Seagrove) and Giuseppe Marconi, all of whom become suspects! With time running out and his own life in jeopardy, how does Holmes save the day? Elementary, my dear…