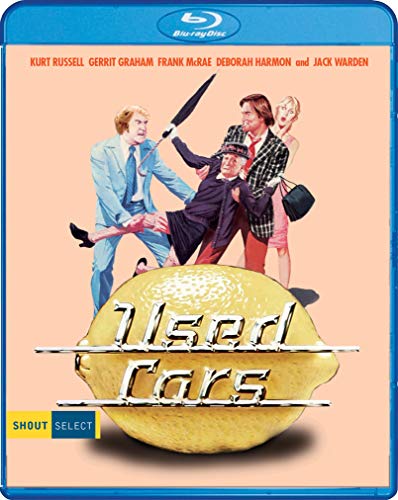 "Hilarious black comedy", Time Out
"Savagely funny", The Onion A.V. Club
"Riotous … inventive … memorable", TV Guide
Director and co-writer Robert Zemeckis (Forrest Gump, Who Framed Roger Rabbit, the Back To The Future trilogy) is the engine behind Used Cars the hilariously raunchy salute to those supersalesmen who&#146ll offer lemons while putting the squeeze on you.
Rudy Russo (Kurt Russell, Escape from New York) has what it takes to be top salesman on Luke Fuchs&#146 (Jack Warden) car lot he&#146s the most charming man who&#146ll ever lie to you. Caught up in a feud between Luke and his brother/rival Roy L. Fuchs (also played by Warden), Rudy gears up for an all-out war. Employing his gifts of gab and grift along with increasingly outlandish sales tactics Rudy shifts the battle for sales supremacy into overdrive, turning the lot into a high-octane free-for-all!
Woefully underappreciated on its initial release, Used Cars has since become a cult favorite hailed for its trunkload of talent in front of and behind the camera, and its rich Corinthian laughter. So tell me: what can I do to get you into Used Cars today?

Be the first to review “Used Cars” Cancel reply